Internationally renowned DJ and Brighton resident, Norman Cook, AKA Fatboy Slim, is spearheading the Snailspace campaign; a street art project with a difference, as fifty giant snails take over the streets of Brighton & Hove this autumn to raise money for Martlets Hospice. In order to produce a unique work of art from his giant fiberglass snail, he’s collaborating with street artist, Cassette Lord (Martin Middleton) to create a distinctive and unforgettable design.

Strictly under wraps to prevent artistic espionage, their snail design is currently top secret. However, given both artists connection to music, tech and the retro aesthetic, it is likely to be more than a simple sculpture. Norman has a reputation for championing artists and most recently commissioned urban artist, Bordalo II, to create a giant sculpture of a seagull from recycled plastic at his Big Beach Cafe. He’s also no stranger to giant animal sculptures as in 2016 he sponsored a Snowdog, as part of Snowdogs by the Sea. Called ‘Boomer’, it was transformed into a working Boom Box by Ryca and sold for £20,000. 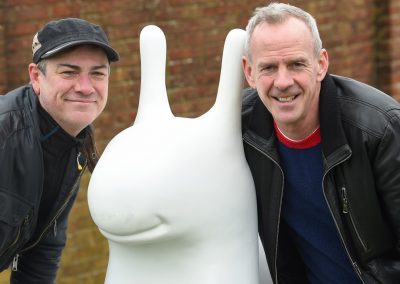 Norman explains why he’s involved in the project:“ I loved the experience of being involved in Snowdogs by the Sea. The giant canine sculptures captured peoples’ imaginations and really brought the city together. The snail is an inspired choice as I love the idea of something usually so small being made large. I also love the fact that you just bump into a sculpture on your way into work, or your everyday journey, and it just makes you smile. There is also something about the whole idea of #BeMoreSnail which resonates. I think it is important to slow down and spend a bit more time doing the things we love, with the people we love.”

He continues on why he wanted to collaborate with Cassette Lord: “I’ve been a fan of his work for a long time and this seemed like a great project to work on together. I know he’s going to bring something special to the snail…. just don’t ask me what it is yet, as we want to retain an element of surprise. We ‘re also planning an exhibition of street art when the project goes live in September.”

Originally from Portsmouth, Brighton based street artist Martin Middleton, aka Cassette Lord, transforms the urban landscape with his bright, bold and surreal stencil work. He’s made it his mission to transform Brighton’s bland green junction boxes into giant cassette tapes.  He explains: “The cassette tape was the right shape for the junction boxes and the perfect retro choice for the art and music saturated landscape of Brighton. I loved the prospect of seeing these massive cassettes sticking up out of the pavement like they had been ejected from some huge subterranean cassette-playing mother ship!”

Talking about why he wanted to get involved in creating a giant snail Martin said:

“I’m a fan of American artist Claes Oldenburg, who takes tiny everyday objects and makes them into massive sculptures, which is exactly what this project does. With our cities crammed full of advertising, signs and signals I think it is really important to implant the abstract and surreal in the everyday to remind us that our visual reality and environment can be altered and doesn’t always have to make sense, it’s important not to lose that sense of play”.

Fatboy Slim’s snail will take its place alongside 49 other giant snail sculptures, each uniquely decorated by artists. They will hit the streets of Brighton & Hove from Saturday 15th September until Sunday 18th November 2018 and be on show nine weeks. Every snail sculpture will be auctioned to raise money for Martlets and its life-changing care.

Snailspace is public art event. Fifty giant snail sculptures, each sponsored by a business and individually decorated by artists will be on the streets of Brighton & Hove from Saturday 15th September until Sunday 18th November 2018. They will be on show for nine weeks, then brought together for a final time in a Farewell Event and finally auctioned to raise money for Martlets Hospice. The giant snail sculptures will also be joined by more than 50 smaller snails as part of the Junior Snailway. Schools and youth groups will decorate their own snails, which will be displayed in accessible locations across the city. Snailspace is being produced in partnership with Wild in Art, one of the leading producers of spectacular, mass-appeal public art events.